Opportunities and Challenges of Technological Evolution in Cloud Native

According to the CNCF 2021 survey, there are a very significant number (over 62,000) of contributors in the Kubernetes community. With the current trend of technology, more and more companies are investing more cost into Cloud Native and joining the track early for active cloud deployment. Why are companies embracing Cloud Native while developing, and what does Cloud Native mean for them?

Docker introduced container images to the technology world, making container images a standardized delivery unit. In fact, before Docker, containerization technology already existed. Let's talk about a more recent technology, LXC (Linux Containers) in 2008. Compared to Docker, LXC is less popular since Docker provides container images, which can be more standardized and more convenient to migrate. Also, Docker created the DockerHub public service, which has become the world's largest container image repository. In addition, containerization technology can also achieve a certain degree of resource isolation, including not only CPU, memory, and other resources isolation, but also network stack isolation, which makes it easier to deploy multiple copies of applications on the same machine.

Now more and more companies are actively embracing Kubernetes and transforming their applications to embark on Kubernetes deployment. And Cloud Native we are talking about is actually based on the premise of Kubernetes, the cornerstone of Cloud Native technology. 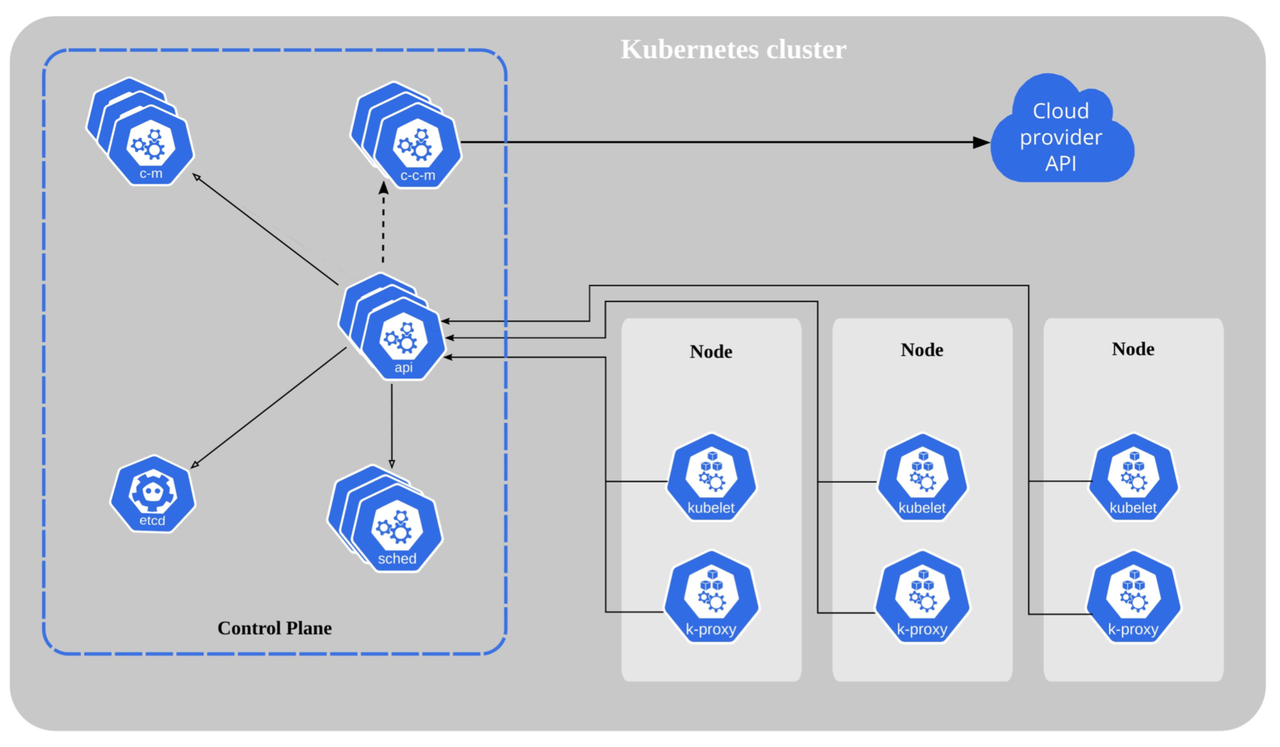 In addition, there are various patterns included in a microservice architecture. For example, the per-service database pattern, which represents each microservice with an individual database, is a pattern that avoids database-level impact on the application but may introduce more database instances.

Another one is the API Gateway pattern, which receives the entrance traffic of the cluster or the whole microservice architecture through a gateway and completes the traffic distribution through APIs. This is one of the most used patterns, and gateway products like Spring Cloud Gateway or Apache APISIX can be applied.

In theory, it seems possible, but in practice there are some challenges. In a Cloud Native microservice architecture, these components need to run not just in containers, but also include other aspects such as service registration, discovery, and configuration.

The migration process also involves business-level transformation and adaptation, requiring the migration of common logic such as authentication, authorization, and observability-related capabilities (logging, monitoring, etc.) to K8s. Therefore, the migration from the original physical machine deployment to the K8s platform is much more complex than it is.

In this case, we can use the Sidecar model to abstract and simplify the above scenario.

Typically, the Sidecar model comes in the form of a Sidecar Proxy, which evolves from the left side of the diagram below to the right side by sinking some generic capabilities (such as authentication, authorization, security, etc.) into Sidecar. As you can see from the diagram, this model has been adapted from requiring multiple components to be maintained to requiring only two things (application + Sidecar) to be maintained. At the same time, the Sidecar model itself contains some common components, so it does not need to be maintained by the business side itself, thus easily solving the problem of microservice communication. 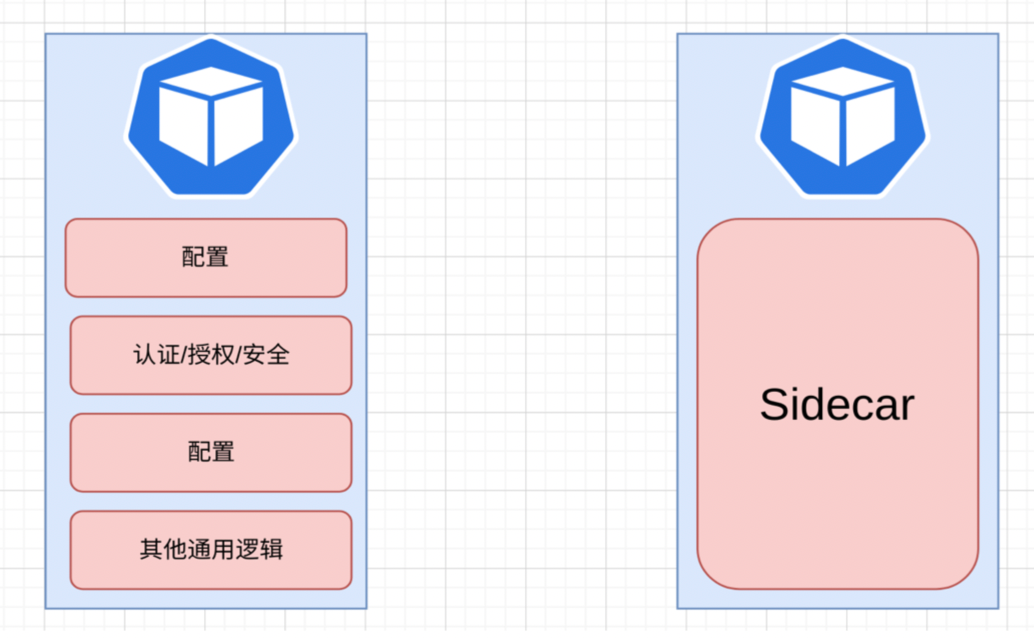 To avoid the complex scenes of separate configuration and repeated wheel building when introducing a Sidecar for each microservice, the process can be implemented by introducing a control plane or by control plane injection, which gradually forms current Service Mesh.

Service Mesh usually requires two components, i.e., control plane + data plane. The control plane completes the distribution of configuration and the execution of the related logic, such as Istio, which is currently the most popular. On the data plane, you can choose an API gateway like Apache APISIX for traffic forwarding and service communication. Thanks to the high performance and scalability of APISIX, it is also possible to perform some customization requirements and custom logic. The following shows the architecture of the Service Mesh solution with Istio+APISIX. 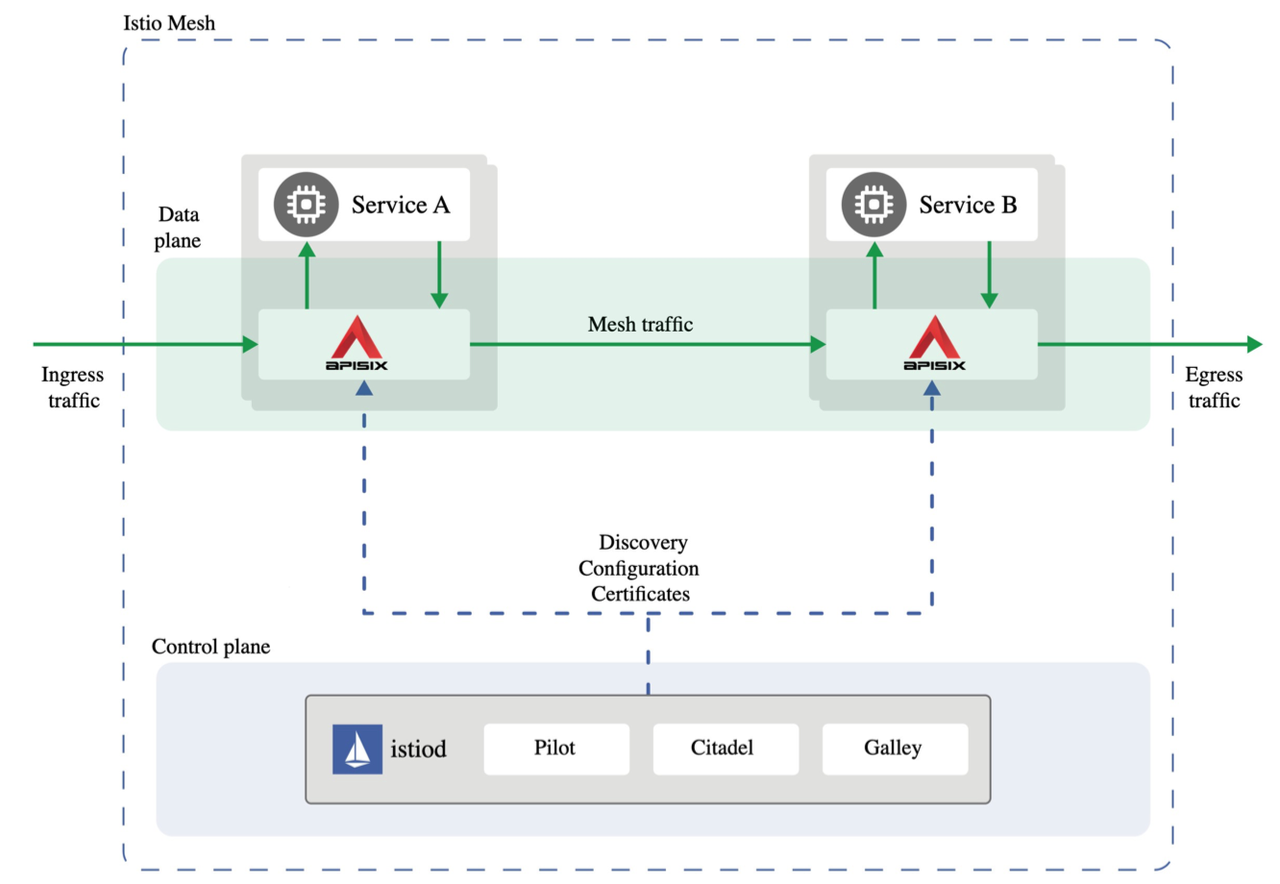 The advantage of this solution is that when you want to migrate from the previous microservice architecture to a Cloud Native architecture, you can avoid massive changes on the business side by using a Service Mesh solution directly.

The previous article mentioned some of the advantages of the current Cloud Native trend in terms of technical aspects. However, every coin has two sides. Although some fresh elements and opportunities can be brought, challenges will emerge due to the participation of certain technologies.

Problems Caused by Containerization and K8s

In the beginning part of the article, we mentioned that containerization technology uses a shared kernel, and the shared kernel brings lightness but creates a lack of isolation. If container escape occurs, the corresponding host may be attacked. Therefore, to meet these security challenges, technologies such as secure containers have been introduced.

In addition, although container images provide a standardized delivery method, they are prone to be attacked, such as supply chain attacks.

Similarly, the introduction of K8s has also brought about challenges in component security. The increase in components has led to a rise in the attack surface, as well as additional vulnerabilities related to the underlying components and dependency levels. At the infrastructure level, migrating from traditional physical or virtual machines to K8s involves infrastructure transformation costs and more labor costs to perform cluster data backups, periodic upgrades, and certificate renewals.

Also, in the Kubernetes architecture, the apiserver is the core component of the cluster and needs to handle all the inside and outside traffic. Therefore, in order to avoid border security issues, how to protect the apiserver also becomes a key question. For example, we can use Apache APISIX to protect it.

The use of new technologies requires additional attention at the security level:

Most of the Cloud Native scenarios involve some observability-related operations such as logging, monitoring, etc.

In K8s, if you want to collect logs in a variety of ways, you need to collect them directly on each K8s node through aggregation. If logs were collected in this way, the application would need to be exported to standard output or standard errors.

However, if the business does not make relevant changes and still chooses to write all the application logs to a file in the container, it means that a Sidecar is needed for log collection in each instance, which makes the deployment architecture extremely complex.

Back to the architecture governance level, the selection of monitoring solutions in the Cloud Native environment also poses some challenges. Once the solution selection is wrong, the subsequent cost of use is very high, and the loss can be huge if the direction is wrong.

Also, there are capacity issues involved at the monitoring level. While deploying an application in K8s, you can simply configure its rate limiting to limit the resource details the application can use. However, in a K8s environment, it is still rather easy to over-sell resources, over-utilize resources, and overflow memory due to these conditions.

At the application architecture evolution level, the core issue is service discovery.

Meanwhile, if enterprises choose Cloud Native technology, with the expansion of business scale, they will gradually go to consider the direction of multi-node processing, which will then involve multi-cluster issues.

For example, we want to provide customers with a higher availability model through multiple clusters, and this time it will involve the orchestration of services between multiple clusters, multi-cluster load distribution and synchronization configuration, and how to handle and deploy strategies for clusters in multi-cloud and hybrid cloud scenarios. These are some of the challenges that will be faced.

Currently, based on the architectural evolution and application changes described above, APISIX-based Ingress controller and Service Mesh solutions have also been derived in Apache APISIX to help enterprises to better carry out digital transformation.

Currently, APISIX Ingress Controller supports the following three configuration methods and is compatible with all APISIX plugins out of the box:

APISIX Ingress Controller has the following advantages over Ingress NGINX:

Currently, APISIX Ingress Controller is used by many companies worldwide, such as China Mobile Cloud Open Platform (an open API and cloud IDE product), Upyun, and Copernicus (part of Europe's Eyes on Earth).

APISIX Ingress Controller is still in continuous iteration, and we plan to improve more functions in the following ways:

If you are interested in the APISIX Ingress solution, please feel free to follow the community updates for product iterations and community trends.

Currently, in addition to the API gateway and Ingress solution, the APISIX-based Service Mesh solution is also in active iteration.

The APISIX-based Service Mesh solution consists of two main components, namely the control plane and the data plane. Istio was chosen for the control plane since it is an industry leader with an active community and is supported by multiple vendors. APISIX was chosen to replace Envoy on the data side, allowing APISIX's high performance and scalability to come into play.

APISIX's Service Mesh is still being actively pursued, with subsequent iterations planned in the following directions:

Did you find this article valuable?

Support Jintao Zhang by becoming a sponsor. Any amount is appreciated!